Kiah Ashton Browne 22, a professional makeup artist speaks to UCIA about how previously working within the hairdressing and beauty industry, she found her passion for makeup artistry.

Kiah, was just months off being a fully qualified hairdresser when she decided to further study beauty therapy and then decided makeup was what she really wanted to do. “Make up was the way to go.” She enrolled into a diploma of specialist makeup and said, “If I did not do my course, I think I probably would have self-taught. Everything always seemed to come back to makeup. Even when I was younger and did dancing, I always did my own makeup. It is just funny after all this time I have finally found my niche.”

Kiah spoke about the possibility of continuing and expanding her makeup knowledge by moving to the USA. “I really wanted to study further in America, but would have to get a schooling visa and that is an expensive and difficult process.”

Makeup artistry is an incredibly creative field of work that allows an artist to create masterpieces on other people’s faces and bodies. Kiah said she draws inspiration from all
sorts of different objects, colours and other artists.
“You just have to have that one creative idea. If you have one thing that looks great, run with it. I draw inspiration from lots of sources and find colour and seeing a vision the place to start. If you have an idea in your head, play with it. If it does not look right the first time, take it off and do it again. It can be a process of trial and error. I use face pleat sheet, where I do my first original idea with make up on the paper, then copy the design onto myself the exact same way and if it does not look right, I would start from scratch and do it again.”

Social media is forever growing these days, especially Instagram and YouTube for makeup artistry. It is a platform for artists to show off their work, network with other people and for others to be inspired. Kiah said, “Youtube is great for inspiration, you just cannot copy anyone else. It is a big no no.” Kiah is inspired by a lot of artists who do freelance work and have their own Youtube channels, “I love the works of Glam&Gore, Lex and her channel MadeYewLook, Chrisspy and Jamie Genevieve.” Kiah said her favourite makeup artist is Alex Box, who does all sorts of amazing designs and works on models for runway shoots.

During her time studying makeup, Kiah worked on a lot of different projects that helped in, building a folio of work that she could show to future employers.
“One of my favourite pieces was my final body painting assessment that had to look like an illusion, so I wanted to make the chick look like she was blending with the background. It was one of my favourite things to do.”

During Kiah’s makeup course, she had to do many hours of freelance work to get hands on experience and use the skills she was learning. As part of this, she had the opportunity of working on a short film. “I worked on a short film called “Lurk” by Andrew Kirkman and I got offered to do make up for other feature film afterwards which was great exposure for me.” It can be hard to get your name out there and to get work but Kiah said, “Networking is what it is all about. Often word of mouth and referrals as well as social media, help to get your name out there.”

Like most working industries, you always come up with competition between other people wanting to crack into the same industry as yourself. When asked if Kiah felt like there was a lot of competition between herself and others within the makeup industry, she said, “There is a lot of us out there and everyone is unique and different in their own way. Everyone has their niches and are better at some things than others.”

Over time, Kiah has had the opportunity to start her own makeup kit. “I have a makeup kit which cost me a fortune and grew over time. Often you get products recommended to you and even if you don’t use it to begin with, you often might use it later down the track. With the cost of me applying makeup, I try and make it affordable as possible.”

With a makeup kit, comes a lot of different brands, products, colours etc but how does Kiah go about spending money on a product she may have never used before? She said, “It is all trial and error with products. “I love the brands Motives and Nyx. Inglot eye shadow pallets are also amazing as they are so pigmented and the colours look fantastic. Everything is online these days. The amount of people that buy online these days is crazy, especially make up.”

Kiah is a young, extremely ambitious and talented individual who has a bright future. She has a lot of dreams and aspirations which all revolve around working within the makeup industry. Kiah said, “Originally I wanted to open up a makeup studio, where I would offer to do different types of makeup and have the option for them to have a photo shoot done afterwards. Now I am not too sure and feel it may not be the right direction for me at moment and I would like to get into doing makeup for films. Makeup I now know is what I want to do, I don’t want to be doing anything else. I want to be able to do freelance work. I want to purely focus on makeup. I have my own studio and it looks great and I just want to be able to make use of it. Ideally I would love to do makeup for Australia’s Next Top Model. Hopefully in the future I will be doing makeup and makeup only.” 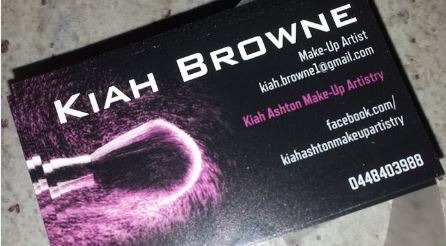